So I was waiting to read this novel because I wanted it to be atmospheric and spooky, but I could not wait to read it, so I succumbed to my wants and picked it up this afternoon!

I received this novel from Penguin Random House in exchange for an honest review! 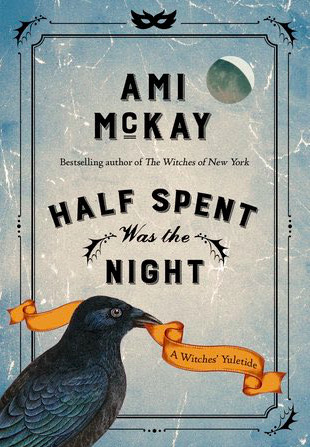 Plot:
During the nights between Christmas and New Year’s, the witches of New York–Adelaide Thom, Eleanor St. Clair and the youngest, Beatrice Dunn–gather before the fire to tell ghost stories and perform traditional Yuletide divinations. (Did you know that roasting chestnuts were once used to foretell one’s fate?)
As the witches roast chestnuts and melt lead to see their fate, a series of odd messengers land on their doorstep bearing invitations for a New Year’s Eve masquerade hosted by a woman they’ve never met. Gossip, dreams and portents follow, leading the witches to question the woman’s motives. Is she as benevolent as she seems or is she laying a trap. And so, as Gilded-Age New York prepares to ring in the new year, the witches don their finery and heard for the ball, on the hunt for answers that might well be the end of them.

“Christmas Day has come and gone, the New Year lies ahead. Strange things happen Between the Years, in the days outside of time. Minutes go wild, hours vanish. Idleness becomes a clever thief, stealing the names of the days of the week, muting the steady tick of watches and clocks. These are the hours when angels, ghosts, demons and meddlers ride howling wind and flickering candlelight, keen to stir unguarded hearts and restless minds.”

I read The Witches of New York by Ami Mckay when it first came out, and when I found out she was coming out with a novella of sorts for it, I was ecstatic.

The Witches of New York is the perfect fall read, with witches and magic and demons littered throughout.

I was expecting something a bit different from this novella. I expected it to be filled with little stories passed from generations of witches throughout the year. I was looking forward to the girls sitting around a fire and sharing the stories their ancestors told them.

Unfortunately that wasn’t exactly what this novella was. Instead it was a sort of extension/conclusion to The Witches of New York. That being said, I was not totally let down by this novella because I did definitely love getting the closure I was looking for when I finished The Witches of New York. I was expecting Ami Mckay to come out with a sequel for the novel, but instead she chose the route of a novella.

This novella still held the fall, spooky feeling I was looking for. It had the magic and witchery and atmosphere that drew me in the first time, and it was definitely nice to see the girls from the first novel and see what they were up to this time.

I did find this novella to feel a bit fast paced for my liking. It felt like Ami Mckay was trying to jam pack all the plot holes left unfilled from the first novel into this novella, and that made it not feel as though it was planned well enough.

I loved seeing a couple recipes mentioned in the story dispersed throughout this novella in full form. It’s a fun idea to include the recipes in case a reader wants to get the full experience and also bake the goods mentioned. This was also a fantastic way to split the moments in the novella up a bit.

All in all this was a fun short read. It wasn’t exactly what I wanted, but I enjoyed it nonetheless. If you were a fan of The Witches of New York and have been looking for closure, definitely pick this novella up when it comes out and give it a read by the fire on a cold winters day.

That concludes my review for Half Spent was the Night by Ami Mckay.