This post is one that I’m hesitant to write, mainly because I really don’t know what my feelings about this novel are. I tried to give it a couple days, but several days after reading it I’m still unsure about how I feel!

I’ve decided to just jump into the review and write down exactly what I feel at the current moment!

I’d like to thank Harper Collins for providing me with a review copy of this novel in exchange for an honest review!

Let’s jump into it. 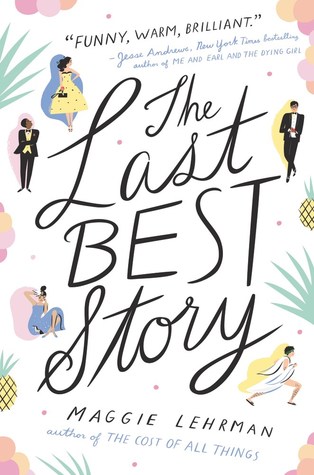 Plot:
Rose Regnero was a star reporter for her high school paper, destined for a career in journalism, when she abruptly quit two months ago, leaving behind her very-nearly-sort-of-boyfriend and editor-in-chief, Grant. Now she is trying to be normal at her senior prom, with a new boy and new interests, and isn’t looking back.

Grant was totally blindsided when Rose walked away from the Gazette. After all, they’d dedicated their lives to it for the past four years, had even planned on majoring in journalism together at Northwestern—which is why Grant is determined to entice Rose back. But whether it’s really to the paper or to him he’s not entirely sure.

When an alarm is set off at prom and the school goes on lockdown, Grant discovers that someone is loose in the building with a gun. But Rose, caught outside of the gym, knows differently. Will her instincts for a good story win out against her resolve to leave Grant and the paper behind?

I received this novel a while ago and because of that when I finally did pick it up I decided not to read the synopsis and go into the novel blind. I figured from the front cover (which is beautiful and cutesy and colourful) that this novel would be an allover easy read. This novel definitely wasn’t a totally easy read, a majority of the novel felt easy but there were so many intense topics being discussed.

I was completely surprised that this novel featured a school shooting threat. It was very out of no where, especially when the novel primarily featured these two characters that were having their own weird relationship whilst all of this was going on.

The writing of this novel was quite normal for any YA contemporary. I didn’t find it to be extraordinary, but it also wasn’t something that I altogether hated. It was easy to read and very easy to quickly get through.

As for the characters, I found them all (almost all) insufferable. They were wrapped up in their own world and didn’t really understand the severity of the situation taking place. They also had no care whatsoever for anyone else’s feelings. They did things because they wanted to and didn’t give a second thought to how another person would be affected. I ultimately only liked one or two of the characters of this novel, and neither of them were the main protagonists.

The plot was also something I’ve had to mull over for a bit after reading the novel. As entertained as I was throughout the novel, and I can’t deny that I was, this novel just didn’t sit entirely right with me. It was really weird to read about a potential school shooting but also have all of the characters running around acting like nothing out of the ordinary was happening. It was an interesting take on the school shooting plot line that has frequented several novels throughout these recent months, but it was just altogether a weird plot.

As weird as I found the entire plot and situation going on, I can’t deny that I did enjoy this novel. It was a quick read and it did feature some important topics, despite how unconventional the presentation of those topics were. I understood the direction that the author was trying to go in and I really did like the mystery element that was placed in this novel. It was not an entirely hard mystery to figure out, but it was a nice element.

All in all, I think that if you’re a fan of YA contemporary novels with romance and mystery dispersed throughout I would recommend you pick this novel up. If you’re looking to pick up a novel that features a school shooting as the primary plot line and does it well, I would highly recommend you pick up That’s Not What Happened by Kodi Keplinger.

That concludes my review for The Last Best Story by Maggie Lehrman.