It has been a couple of days (?) since my last blog post and I sincerely apologize for that! I have had a lot going on + a lot of reading I wanted to get done these past couple of days, and just didn’t have a chance to sit down and write a blog post for you all!

This novel was one that was super intimidating for me to pick up, especially after I read The Way of Kings, also due to the fact that my boyfriend loves this book and thinks it’s the best book in existence.

I didn’t want to be disappointed or rush this one.

Alright, let’s just get into the review and see how I felt about this book! 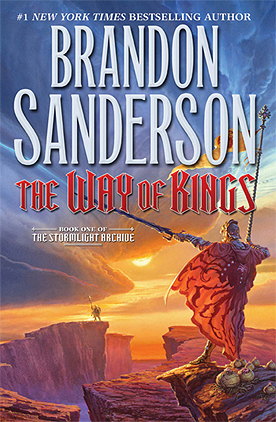 Plot: (Plot for Book 1 Below)
Roshar is a world of stone and storms. Uncanny tempests of incredible power sweep across the rocky terrain so frequently that they have shaped ecology and civilization alike. Animals hide in shells, trees pull in branches, and grass retracts into the soilless ground. Cities are built only where the topography offers shelter.

It has been centuries since the fall of the ten consecrated orders known as the Knights Radiant, but their Shardblades and Shardplate remain: mystical swords and suits of armor that transform ordinary men into near-invincible warriors. Men trade kingdoms for Shardblades. Wars were fought for them, and won by them.

One such war rages on a ruined landscape called the Shattered Plains. There, Kaladin, who traded his medical apprenticeship for a spear to protect his little brother, has been reduced to slavery. In a war that makes no sense, where ten armies fight separately against a single foe, he struggles to save his men and to fathom the leaders who consider them expendable.

Brightlord Dalinar Kholin commands one of those other armies. Like his brother, the late king, he is fascinated by an ancient text called The Way of Kings. Troubled by over-powering visions of ancient times and the Knights Radiant, he has begun to doubt his own sanity.

Across the ocean, an untried young woman named Shallan seeks to train under an eminent scholar and notorious heretic, Dalinar’s niece, Jasnah. Though she genuinely loves learning, Shallan’s motives are less than pure. As she plans a daring theft, her research for Jasnah hints at secrets of the Knights Radiant and the true cause of the war.

Alright, this review isn’t going to be super long winded because I don’t want to risk giving away ANY types of spoilers + this novel was just so long that I don’t think I could cover every thought of mine in a reasonable amount of time.

Firstly I’d like to just say that my boyfriend was right. He bugged me so much about reading this novel, and I agree, it’s amazing.

It was a bit hard for me to get going for this book, but that mostly had to do with me not having enough time and just being a bit nervous about starting the monster of a book.

This novel follows right after where book one of The Stormlight Archive left off. It was an incredible addition to the world that we got to know in The Way of Kings and it definitely built upon our knowledge in such an amazing way.

I found that the character development in this novel was honestly exactly what I was looking for. I gave The Way of Kings a 4/5, and a large part of that had to do with me not being able to get into the novel, which was due to me not loving some of the characters.

This novel totally turned everything around for me and made me rethink all my feelings towards certain characters, and it was mind blowing.

Additionally, I found that the plot of this novel definitely had a lot more going on in comparison to the first novel. This obviously makes sense because the first novel was basically setting up this gigantic world for us, but I’m glad to see that Sanderson didn’t drop the ball in terms of plot development.

All in all, this novel was fucking amazing. I thought it was intriguing, and fascinating, and all the characters (most) were so fucking loveable and great and had amazing plot lines and backgrounds and voices.

Honestly, I’m sad because next month when I read Oathbringer I won’t have any more books from this series to read until Brandon Sanderson decided to grace us with another novel, but I can’t wait to finally get into Oathbringer. It’s going to be amazing.

Sorry for that long winded review of Words of Radiance, but I had to just get all my thoughts out before I forgot something that I loved about the novel (highly unlikely).

3 thoughts on “Words of Radiance by Brandon Sanderson”