Hey guys! So this book took me a couple days to finish up, and it was really getting a bit frustrating for me. I’m very glad that I’m finally done – and that I can finally move on to City of Fallen Angels! 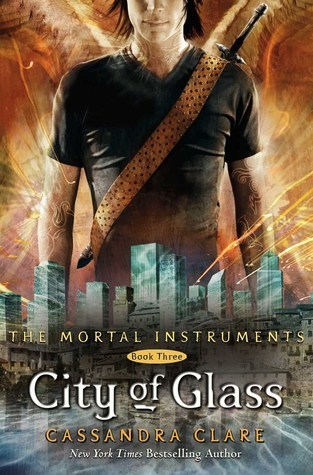 Plot:
To save her mother’s life, Clary must travel to the City of Glass, the ancestral home of the Shadowhunters – never mind that entering the city without permission is against the Law, and breaking the Law could mean death. To make things worse, she learns that Jace does not want her there, and Simon has been thrown in prison by the Shadowhunters, who are deeply suspicious of a vampire who can withstand sunlight.

As Clary uncovers more about her family’s past, she finds an ally in mysterious Shadowhunter Sebastian. With Valentine mustering the full force of his power to destroy all Shadowhunters forever, their only chance to defeat him is to fight alongside their eternal enemies. But can Downworlders and Shadowhunters put aside their hatred to work together? While Jace realizes exactly how much he’s willing to risk for Clary, can she harness her newfound powers to help save the Glass City – whatever the cost?

I must say that this book was a lot better than the previous novels in the series – but it wasn’t amazing.

I found myself putting this book down a lot and wanting a break from it more than I wanted to. I don’t know if this is because I’ve read too much from the TMI world and I need a slight break from the world and these characters – but I’m just not enjoying it.

Clary was so fucking annoying in this book. When she messed up everyones plans just so she wouldn’t be left out – ugh. I understand that in the end it was important that she went to Alicante, but it was still irritating to watch her act so entitled.

I found myself annoyed with her quite often during the beginning of the novel, but near the end my annoyance seemed to simmer down – which was good.

I wasn’t happy about Max’s death in this novel. It was unfair and sad and horrible (honestly, I didn’t realize it happened until later… I don’t know if I missed the mention of Max when Sebastian was holding the hammer or what – but I missed it!).

Oh my. SEBASTIAN. I KNEW IT.

When we first encountered Sebastian – I was instantly suspicious, but when he met Clary. I KNEW IT. I knew he was her brother and I had no doubts in my mind. When Jocelyn was telling Clary I was just sitting there like “yes, yes, I know, just tell me”.

I must say I’m happy that we don’t have to suffer through Jace and Clary being “incestuous” anymore. I think that was the main reason I was uncomfortable through the last book – I knew they weren’t siblings, but they didn’t and they still kissed and stuff (gross).

I also wished that we had more Jocelyn and Clary drama. I felt like that reunion was so short lived – especially since the whole point of Clary’s trip to Alicante was to save her mom and their reunion lasted like two seconds.

I still love Alec and Magnus, and I still love Luke. Magnus is definitely my favourite character throughout this series and I don’t really see myself loving anyone more than I love him.

Valentine is dead, so I don’t really know how the story will continue to more books. Will Sebastian come back? Will there be drama with other members of the Clave? Is Jocelyn actually evil? I really don’t know.

All I know is that I need to take a slight break from this series – or else I will go insane and dream of runes.

That concludes my – slightly crazy – review for City of Glass by Cassandra Clare!

Thank you so much for reading! Don’t forget to follow my blog as well as my other social media accounts linked in the side bar!

9 thoughts on “City of Glass by Cassandra Clare – contains spoilers”